At Franklin County Rural Water District 1, our goal is to provide safe, clean, sparkling water to all of our residents!

The concept for rural water districts was to provide constant, safe drinking water to rural farms. The first district in Franklin County was initiated in approximately 1965. The number of original subscribers was slightly over 100. The landowners who were interested were required to invest $100.00. The Federal Farmers’ Home Association loaned the District $100,000.  The cost of installing the original pipeline and appurtenances was $120,000.  Subsequent customers were required to purchase a “benefit unit”, an intangible benefit defined as the right to draw water from the District. A landowner interested in securing rural water was required to submit an application to the District Board of Directors, who then considered whether or not to approve the application. Factors to be considered were:
1) Was the District’s water supply adequate to furnish the customer?
2) Was it necessary to construct additional water mains?
3) Where was the site located?
The District was incorporated under the auspices of the County Commissioners and Rules and Regulations and By-Laws were adopted. These requirements were mostly dictated by the Federal loaning agency and were intended, among other things, to protect the government loan. Incorporation generally is considered a function of the Office of the Secretary of State. 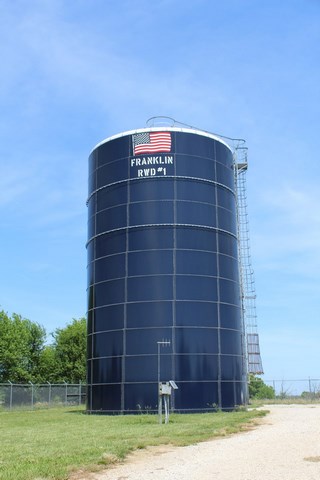 Pipelines were laid, along K-68 from the Ottawa City limits, north approximately one mile to what is now Pawnee Road, south to what is now Neosho Road, east along K-68 to what is now Texas Road, then back westward to LeLoup. The line jigged and jogged according to which landowners were interested in acquiring the service.  A pump house was constructed underground at the corner of Davis and what is now known as Pawnee, and a Meter was installed.  A contract was entered into with the City of Ottawa to supply water via this site.  The contract was drawn up for 40 years and expired in 2005.  This underground pumping station was eventually abandoned and removed in 2006.  A "water dispersing" system was alson constructed in the LeLoup area.
In order to make the required payments on the government loan, each member was charged an initial debt service fee of $5.50 per month with an additional charge for water actually used.  With the exception of a very few customers, each customer was provided water via a "drip system."  A cistern was constructed in the vicinity of the residence; a water line was connected to this cistern from the District's main lines.  Water was allowed to "drip" into the cistern at a constant flow of approximately one pint per minute.  A few customers along what is now known as Nebraska Road paid an additional $100.  A stand pipe (a slender water storage tank) was erected just south of Highway K-68, east of I-35, and these few customers were provided water through gravity flow pressure via meters which me3asured actual water use.  Metered water was sold in increments of 1,000 gallons and the user was required to read their own meter and submit readings to the Board representative.  In later years, all "drip" system cisterns were discontinued and water was provided by a system powered by pumps.
Bill Payment Detecting & Locating Leaks Water Quality Report

Receive news and alerts via email or text.

No Alerts at this time.